Trial by Fire (Going Down in Flames #3) by Chris Cannon
Release Date: April 4th 2016
Summary from Goodreads: Bryn’s hopes for a peaceful new semester at school go up in smoke when someone tries to kill her—again. She’s not sure which is scarier, facing the radicals who want to sacrifice her for their cause, or her impending nightmare-of-a-Directorate-arranged marriage to her nemesis, Jaxon. The one bright spot in her life is Valmont, her smoking-hot knight who is assigned to watch over her twenty-four hours a day. Is what she feels for him real, or just a side effect of the dragon-knight bond? At this point, stopping the impending civil war might be easier than figuring out her love life.

Book One: Going Down in Flames by Chris Cannon
Release Date: June 30th 2014
Entangled Teen
Summary from Goodreads: Finding out on your sixteenth birthday you’re a shape-shifting dragon is tough to swallow. Being hauled off to an elite boarding school is enough to choke on. Since Bryn is the only crossbreed at the Institute for Excellence, all eyes are on her, but it’s a particular black dragon, Zavien, who catches her attention. Zavien is tired of the Directorate’s rules. Segregated clans, being told who to love, and close-minded leaders make freedom of choice almost impossible. The new girl with the striped hair is a breath of fresh air, and with Bryn’s help, they may be able to change the rules. At the Institute, old grudges, new crushes, and death threats are all part of a normal day for Bryn. She’ll need to learn to control her dragon powers if she wants to make it through her first year at school. But even focusing on staying alive is difficult when you’re falling for someone you can’t have.

Book Two: Bridges Burned (Going Down in Flames #2) by Chris Cannon
Release Date: January 19th 2015
Entangled Teen
Summary from Goodreads: Since discovering she is a shape-shifting, fire-breathing dragon on her sixteenth birthday (surprise!), Bryn McKenna’s world has been thrown into chaos. Being a “crossbreed”—part Red dragon and part Blue—means Bryn will never fit in. Not with dragon society. Not with the archaic and controlling Directorate. And definitely not when she has striped hair and a not-so-popular affection for rule-breaking… But sneaking around with her secret boyfriend, Zavien, gets a whole lot harder when he’s betrothed to someone else. Someone who isn't a mixed breed and totally forbidden. And for an added complication, it turns out Bryn’s former archnemesis Jaxon Westgate isn’t quite the evil asshat she thought. Now she’s caught between her desire to fit in and a need to set things on fire. Literally. Because if Bryn can’t adapt to the status quo…well, then maybe it’s time for her to change it.


Excerpt:
Sunday, Bryn was happy to find herself at Suzette’s without Jaxon, watching Lillith and the other Blue women ooh and ahh over baby clothes. It made the normally cold and standoffish Blues seem far more human and likable.
And the pie was awesome. Bryn dug into her third piece of cherry pie, while her grandmother handed another gift to Lillith. It seemed her grandmother and Lillith had become friends, which was nice and terrifying at the same time. Nice because Lillith seemed like she needed friends, and terrifying because it implied to all present that they were working at cementing an alliance between the two families, aka the nightmare marriage between her and Jaxon.
Valmont stood on guard off to the side, with a polite smile plastered on his face.
“Isn’t this adorable?” Lillith held out a tiny tuxedo.
A tuxedo for a baby? Seriously? There was even a tiny bow tie. Poor kid. If Clint thought penguin suits were uncomfortable now, what would they be like for a baby?
Bryn leaned over and spoke to the woman next to her. “Can you really get a baby to wear one of those?”
“Of course.” She seemed shocked by the question.
No wonder Jaxon and his friends acted so stiff and formal. It had been drummed into them since birth.
Lillith unwrapped Bryn’s present next.
“Oh, Bryn, I love it.” She held out the silver rattle with Westgate engraved down the side so everyone could see.
Warmth bloomed in Bryn’s chest, somewhat filling the gaping hole left by her parents death. If she had to marry Jaxon, at least she’d gain Lillith as a mother-in-law. Oh, holy hell, are there drugs in the cherry pie? How’d I think that without flinching?
She smiled at Lillith. “I’m glad you like it.”
“You know, if things turn out like we expect, you could receive one of these one day.” Lillith beamed.
Bryn opened her mouth to object, vehemently and with great gusto and many obscenities, at the idea of giving birth to Jaxon's children. It was bad enough she’d thought about marrying him, but having his kids deserved a whole other level of freaking out. Then she realized every woman in the room was staring at her. She swallowed her, over-my-dead-body response, and said, “It is a possibility.”
Her grandmother nodded, but Bryn didn’t know whether it was a response to how Bryn had handled the situation or if she was nodding in agreement. She ate two more pieces of pie to quell the instinct to run screaming from the room. 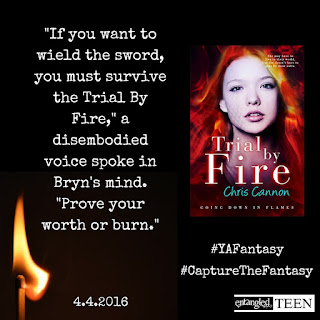 About the Author: Chris Cannon lives in Southern Illinois with her husband and her three dogs, Pete the shih tzu who sleeps on her desk while she writes, Molly the ever-shedding yellow lab, and Tyson the sandwich-stealing German Shepherd Beagle. She believes coffee is the Elixir of Life. Most evenings after work, you can find her sucking down caffeine and writing fire-breathing paranormal adventures or romantic comedies.

GIVEAWAY: A journal, a signed copy of Going Down In Flames (Book 1), signed bookmarks and postcards. (INT) a Rafflecopter giveaway