Book Review: The Haunting of Sunshine Girl by Paige Mckenzie 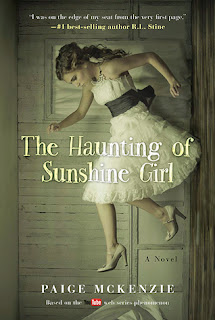 PAGES: 296
STAND ALONE/SERIES: Series
SOURCE: Bought
OUTLINE:
Something freaky's going on with Sunshine's new house . . . there's the chill that wraps itself around her bones, the giggling she can hear in the dead of night, and then the strange shadows that lurk in her photographs. But the more weird stuff that happens, the less her mom believes her. Sunshine's always had a quirky affiliation with the past, but this time, history is getting much too close for comfort . . .

If there is something, or someone, haunting her house, what do they want? And what will they do if Sunshine can't help them?

As things become more frightening and dangerous, and the giggles she hears turn to sobs and screams, Sunshine has no choice but to accept what she is, face the test before her and save her mother from a fate worse than death.

The first in a frighteningly good new series based on the popular YouTube sensation The Haunting of Sunshine Girl Network, created by Paige McKenzie.

MY THOUGHTS
I went into this book not having high expectations because I tried watching some of the you-tube videos that it is based off of, and couldn't really enjoy them. I still wanted to give it a try because I enjoy books about ghosts and other unnatural beings. Once I started it, I became a bit fascinated with it, and I learned that it was a bit more then your average ghost story.

If you're looking for a mature YA read from this book it's not going to happen. This one leans more to the younger audience.

SETTING
Sunshine is originally from Texas but her mother and her move up north for a better job. It's a constant murkiness and darkness with rain. It fits well with the story, and the creepiness that Sunshine is always talking about. I love rain, but there comes that point where it's just too much. When Sunshine and her mom move into this house it seems instant that Sunshine knows something is off with the it. Through out the story the episodes that the house experience seem to grow , and before to long Sunshine learns just what makes this house tick.

CHARACTERS
Sunshine is the main MC in the book, and starting off I really wasn't a fan of hers. She seemed younger than she was, and at I can over look that sometimes. I will say that as the story went on she grew on me, and I loved learning about her, and what she was.
Nolan was the boy who Sunshine met in her art class that gave a new girl a chance. I adored Nolan because his spirit and attitude towards Sunshine was awesome. When no one else believed in her he was there. He stood by her side when things got rocky. He never strayed to far.
We also get to meet Victoria the art teacher that Sunshine has, and from the second she walks in that door to the art room we know Victoria isn't all she seems to be.

END
I had a good feeling that the stranger was going to be the person who it was, but I wasn't expecting some of the other characters to be who they were. It definitely has a few twists in it. I'm curious to see how book two will turn out.

DOWNFALL
The only downfall I had was like I said above it's more for a younger audience.

Posted by Ashley @ Bookaholics Anonymous at 10:43 AM