Fun: My Bookish Stats According to Goodreads

I'm a bit behind, but here are some of my reading stats according to good reads from 2016.

I read 66 books, and my goal was 50 so I say I did a good job. I really want to be one of those readers who can read 100 or more, but depending how much I like the book it may take me longer to read it.

Shortest book was a novella to the House of Night series.
Longest book was Allegiant. Yes, I just finished the series last year because I wanted to be able to compare the movie and book. I shouldn't done that. I was incredibly disappointed with the movie.
Average length around 300 pages sounds about right. I think if it's a longer book my interest may start to fade unless its a series I really love like Vampire Academy.

It's no surprise that Allegiant was the most popular book I read last year. The series itself was popular.
Least popular being The last first game which I can understand it doesn't seem to be well known and it's not YA, it's more New Adult. I really enjoyed the story, and it deals with some issues that aren't found in a lot of books. It's the first in a series. I would recommend it for sure.

I really am not fond of the rating system that good reads has I think they should add 1/2 stars too. You can tell that I'm usually pretty in the middle with how I feel about books.

I can see why An Ember in the Ashes is the highest rated on goodreads from the books I've read. 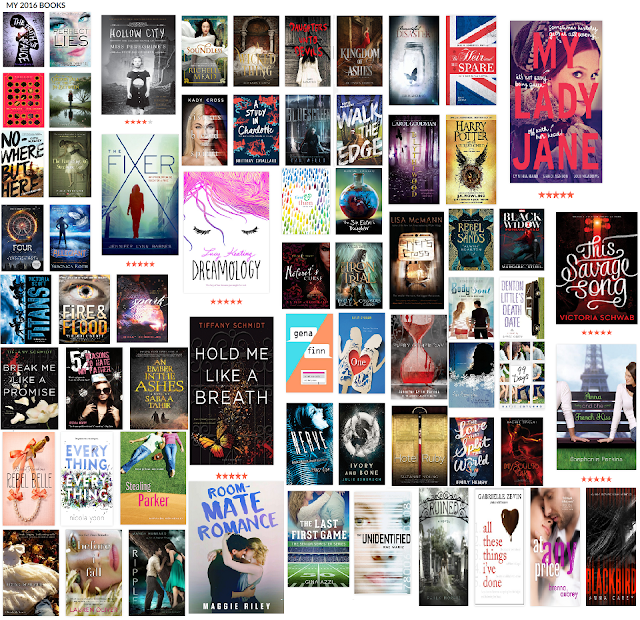 Here is a collage of all the books I read in 2016. I wil they're were some winners in there, and some that fell a bit flat.

Click to see all this on the goodreads homepage