Readathon: Bout of Books 22: The Year of IT

Year of YouShare a book that was published the year you were born. If you don't wish to disclose your age (that's fine; you'll get no judgment either way here), pick a book that was significant to your childhood.Thanks to Courtney Lynn (@ceelynnreading) for today's challenge! 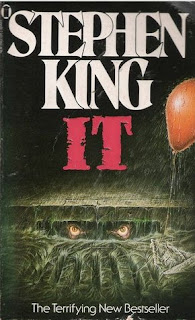 Derry: a small city in Maine, a place as hauntingly familiar as your own home town. Only in Derry the haunting is real...

It began for the Losers on a day in June of 1958, the day school let out for the summer. That was the day Henry Bowers carved the first letter of his name on Ben Hanscom's belly and chased him into the Barrens, the day Henry and his Neanderthal friends beat up on Stuttering Bill Denbrough and Eddie Kaspbrak, the day Stuttering Bill had to save Eddie from his worst asthma attack ever by riding his bike to beat the devil. It ended in August, with seven desperate children in search of a creature of unspeakable evil in the drains beneath Derry. In search of It. And somehow it ended.

Or so they thought. Then.

These six men and one woman have forgotten their childhoods,have forgotten the time when they were Losers...but an unremembered promise draws them back, the present begins to rhyme dreadfully with the past, and when the Losers reunite, the wheels of fate lock together and roll them towards the ultimate terror.

In the biggest and most ambitious book of his career, Stephen King gives us not only his most towering epic of horror but a surprising re-illumination of the corridor where we pass from the bright mysteries of childhood to those of maturity. (less)

I'm not gonna lie. I haven't read this book for a few reasons.
1. It's very intimidating. It's HUGE.
2. I'm not much of a Horror Reader
3. I saw the movie and it scared the crap out of me.
4. It's still INTIMIDATING!

Email ThisBlogThis!Share to TwitterShare to FacebookShare to Pinterest
Labels: 2018, bout of books, challenge, it, stephen king, year of me