The Novel hermit
You’ve received a box of Sweethearts candy, and you’re asked to share the candy with a person or couple – fictional or real. Tell us who you’d give these messages to:
Jesse and Maya from Jesse's Girl by Miranda Kenneally (I mean I guess I should have known from the title but still.
Dimitri from Vampire Academy, but I've come to love a lot of characters from Contemporary books.
Maya from Jesse's Girl ( She wants to be a singer.)
Oz and Razor from The Thunder road books seem like awesome guys who would do anything for the people care about.
Rose and DImitri 4EVA!
I would say, French. I work with someone who speaks French and he is always talking in French and there's something about it.
The Inner Circle from A Court of Mist and Fury (If I can't have Rhysand as a mate.)
Azriel from ACOMAF
Rhysand from ACOTAR no doubt!
Being at Starfall (ACOMAF) or getting to shadow a celebrity (Jesse's Girl)
Cardan from The Cruel Prince
Legend from the Caraval Series 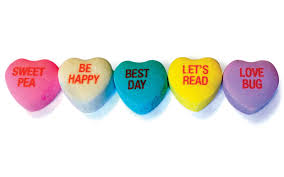 I feel like If I did this 100% almost my answers would be Dimitri so I tried to mix it up a bit.